What is President Joe Biden’s foreign policy strategy so far? Tell other countries they should take advantage of America. Biden’s weakness on foreign policy has reached a new level of absurdity.

Biden’s going soft on Communist China by “partnering” with the regime on climate change. Apparently, he thinks green issues are more urgent than China’s constant attacks on freedom. Take it from his “Climate Czar” John Kerry, who says mere “differences” with China don’t have to “get in the way of something as critical as dealing with climate.”

Biden has taken no real action to stop any of these violations, but he has proposed a budget that would leave less money for the U.S. military than it’s had in years past—all while China gets closer to its goal of building a “world-class military” equipped to take over the world.

Amb. Haley has repeatedly warned that “China is our number one threat around the world.” If Biden kowtows to China, America and the world could soon pay the price. 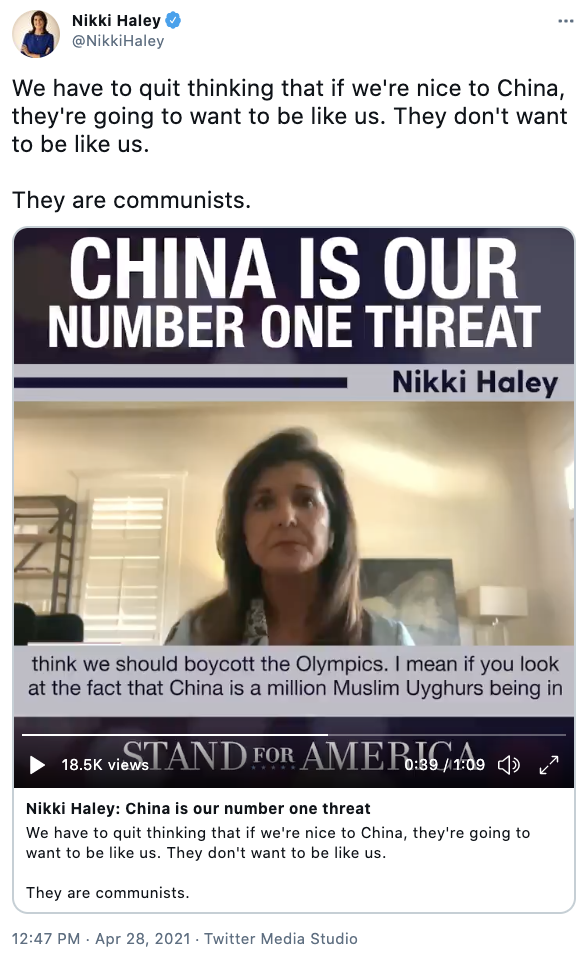 Biden’s weakness on foreign policy doesn’t stop with China. In the Middle East, he is playing into the hands of terrorists and endangering Americans. As Biden desperately rushes to reenter the Iran nuclear deal, he is willing to lift sanctions on Iran—the top state sponsor of terrorism that is responsible for hundreds of American deaths. Amb. Haley was right to point out: Biden’s effort to appease Iran “makes us look so weak around the world.”

To add insult to injury, Biden has restored U.S. relations with crooked U.N. bodies that undermine democracy. He rejoined the U.N. Human Rights Council, which offers membership to tyrants and dictators (see China, Venezuela, and Russia). And he’s abusing our taxpayer money by renewing U.S. aid to the UNRWA—a deceptive, corrupt, anti-Israel agency.

Protecting Americans at home requires American leadership and strength abroad. So far, Biden has all but begged America’s adversaries to take us for a ride.