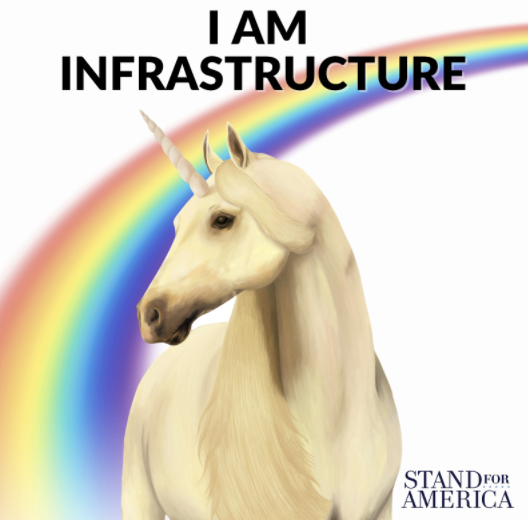 We’ve already told you how Biden’s infrastructure bill is anything but. Here’s more proof: The bill has a $400 billion handout to unions that has nothing to do with roads and bridges.

Much of this massive sum would head straight for the coffers of the SEIU—a big liberal labor union that specializes in health care, not infrastructure. Specifically, Biden’s plan would fund in-home health care workers and require that they be able to join unions. This provision is exactly what the SEIU lobbied for, because it would give them more dues money to funnel to Democratic politicians. By the way, liberal states already have a history of coercing home-care workers into paying union dues, often against their will.

It gets worse. Biden’s bill endorses the PRO Act, which would make it much easier for unions to force workers to join them. The calculus here is simple: More union members = more $$ for unions = more $$ for Democrats. That ain’t infrastructure. It’s a left-wing power grab.

The woke corporate wave is just getting started. Fresh off attacking Georgia’s commonsense voting law, more-liberal-than-thou businesses are now going after reforms in other sensible states.

Texas-based corporations like American Airlines and Dell have already caved to far-left pressure to attack a GOP election bill likely to pass in the Lone Star State. Arizona business leaders are also trying to bully lawmakers into abandoning a new voting proposal. Unsurprisingly, the mainstream media is giving them props and calling on more companies to join the crusade against election integrity.

Nikki Haley was right when she warned that companies getting involved in politics will lead America down a dangerous path we don’t want to tread. Business leaders should start running their businesses and stop telling lawmakers and citizens how to vote and live.