By now you know: Facebook’s ban against former President Donald Trump is being upheld. This is a good opportunity to remind America why censorship is dumb and dangerous—something Facebook’s own leadership used to believe.

Two years ago, Facebook CEO Mark Zuckerberg gave a big speech, saying he and his company “stand for free expression” and think it’s wrong to “censor politicians.” So why are Facebook and other social media companies shutting down debate and discussion between Americans while allowing ads from human trafficking cartels and protecting the profiles of terrorists and dictators? Facebook’s ban is hypocritical, to say the least.

In the words of Ambassador Haley: “This is a gross double standard and it’s why most Americans don’t trust big tech.” 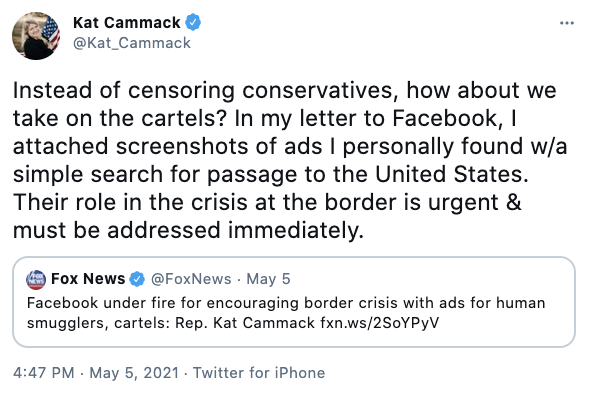 Will the senseless COVID restrictions ever end? Not if Dr. Anthony Fauci has anything to say about it.

Yesterday, Fauci defended CDC guidance saying kids must wear masks and socially distance outside at summer camp. An expert at Fauci’s own government agency said these rules are “virtue signaling” at best and “cruel” at worst. So much for science.

But Americans are fighting back. This week, parents and business owners in Oregon sued the Democrat governor who has kept kids out of classrooms and shuttered mom and pop stores. Americans are sick and tired of government officials and unelected bureaucrats controlling their lives in the pandemic—especially when the rules defy common sense and, yes, science.