Nikki Haley: A Day Of Reckoning Is Coming With The National Debt 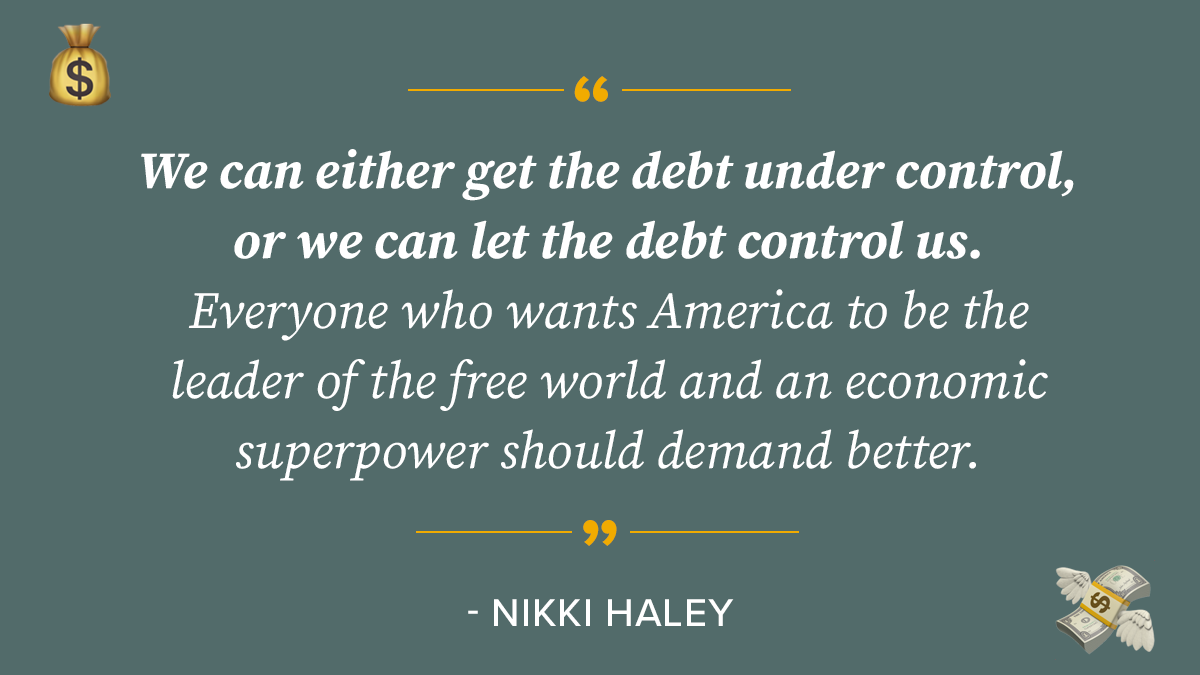 On the world stage, communist China tops the list. Closer to home, the coronavirus pandemic is the most urgent issue. But there’s also a massive fiscal challenge that we face — a crisis we’ve overlooked for a long time and that’s gotten far worse in recent months. It’s the federal government’s spending addiction.

Every American should be seriously worried that the United States is spending far more than we can afford. If the federal government doesn’t stop the spending spree, America will soon find itself poorer, weaker, and smaller in every way.

The coronavirus pandemic has brought this crisis back up. At the start of this year, the federal government was already on track to spend at least a trillion dollars more than it took in. Now, after multiple rounds of pandemic relief, we’ve added more than $3 trillion to the national debt in just six months. Another couple trillion could come before the year is out. America is on track to blow past the debt peak we set in World War II.

Of course, this crisis existed well before the coronavirus pandemic.

When I first ran for office in 2004, the national debt was more than $7 trillion. That was unheard of at the time.

When I was elected Governor of South Carolina in 2010, federal debt had nearly doubled to more than $13 trillion. Some of us thought that was crazy.

At this rate, America will hit a stunning $30 trillion in debt sometime next year, if not sooner. That’s well over $200,000 owed by every taxpayer in the country. Someone has to pay that bill. That someone is us.

It’s tempting to look at these numbers and think that we won’t have to pay it — that America can just go on over-spending forever. After all, we’ve been doing it this long. What’s the problem with another 10 years and $10 to $20 trillion?

One big problem is that paying for the debt is costly. Everyone knows that debt comes with interest, and when the debt goes up, so do the interest payments. That leaves the United States with less money to spend on the military, infrastructure, education, and other essential and important things. It also leaves less money for Social Security and Medicare, which are already on the path to bankruptcy and could face shockingly deep cuts. The more debt we add now, the less America will be able to protect and serve our people.

Another problem is that when debt goes up, people lose faith that America will keep its promises. This makes sense: You wouldn’t trust someone to watch over your family finances who can’t balance their own budget, so why would you trust the government that spends way more than it brings in? When that trust disappears, investing in America suddenly becomes a risky thing. That’s a recipe for economic collapse and American decline.

Nobody wants that. But if we don’t do something about our debt soon, we’re looking at a future of skyrocketing tax hikes and drastic spending cuts. The tax hikes would only cripple the economy even more. The spending cuts could be so steep that they hurt the most vulnerable in our society. As Americans, we can never let that happen.

For the record, despite what some on the left say, we can’t solve this problem by simply taxing the rich. Even if we took every penny from every billionaire in America, we’d barely pay down a tenth of the national debt. The only way to solve this crisis is to tackle spending — and that needs to start now.

The only way to solve this crisis is to tackle spending — and that needs to start now.

Many say that we shouldn’t talk about spending and debt while we’re still in the middle of the coronavirus pandemic. I couldn’t disagree more.

While a lot of the spending over the last few months has been necessary and helpful, a lot of it has been hurtful and counterproductive. Things like relief for struggling small businesses and money for vaccine research and testing are good. Payments to big businesses and Wall Street are bad, and bailouts for states are awful. If we aren’t willing to distinguish between good and bad spending right now, then it’s unlikely we’ll do it later.

Besides, if we don’t start taking on the debt right now, then the situation will only get worse. This is a crisis that doesn’t stand still. Either it’s moving in the right direction or the wrong direction. The decisions we’ll have to make will only get harder with time. So will the pain that the American people will be forced to endure. The choice facing America is clear. We can either get the debt under control, or we can let the debt control us. Everyone who wants America to be the leader of the free world and an economic superpower should demand better.