Our nation may be divided about a lot of things, but it’s good to focus on the celebrations that bring us together. This week, that’s the 100th anniversary of the ratification of the 19th Amendment granting women the right to vote.

Ambassador Haley wrote a forward for a new book published by the Independent Women’s Forum (IWF) called “The Women Who Won the Vote.” The book tells the story of 12 women who made the 19th Amendment possible. Some are famous like Susan B. Anthony and Sojourner Truth. Others are lesser known, but deserve to be just as famous. They include Therese Jenkins, the first woman to serve as a delegate to the Republican National Convention in 1892, and Jeannette Rankin, the first woman to serve in Congress.

Here is a short snippet of Amb. Haley’s forward:

The women of the suffrage movement show us a better way. They saw major flaws in the country, but their answer was to fix those flaws, not break everything else. They did the hard work of convincing others and bringing them along (or to their side). Ultimately, they embraced America instead of rejecting it. That should be our model as we work together to make these United States more free, more just, and more equal for all.

America isn’t perfect. But the principles at the heart of America are. Our job today is to follow in the footsteps of the suffragettes, and all who’ve poured their hearts into making our country’s promises a reality. One of the best ways we can do that is by using the very thing that the suffragettes fought to give us. It’s up to us to vote.

→ Watch more: The history of the 19th Amendment (The History Channel)

Peace in the Middle East 🇮🇱🇦🇪

The Trump administration recently unveiled a surprise announcement: a new peace agreement between Israel and the United Arab Emirates, known as the Abraham Accord.

What does the peace agreement do? The agreement establishes normal relations between the two countries, meaning business relations, tourism, direct flights, scientific partnerships, and full diplomatic ties. It also allows for security cooperation to tackle mutual regional threats, like Iran and its proxy terrorist groups, including Hezbollah in Lebanon and Hamas in Gaza. In exchange, Israel agreed to stop its plans to formally annex large portions of the West Bank.

What’s the reaction been? People across the political spectrum hailed the deal as a major step forward for the future of the Middle East. Palestinian leadership rejected the agreement and withdrew its ambassador from the UAE. Palestinian Authority President Mahmoud Abbas warned other countries not to follow suit.

What does this mean in the long-term? It’s hard to overstate the importance of this breakthrough, and what it means for reshaping the dynamics of the Middle East. First, until now, only two Arab countries had normal relations with Israel: Egypt and Jordan. As Ambassador Haley has often said, other Arab countries often worked with Israel and talked about them positively—but only behind closed doors. They were hesitant to do so publicly. The Israel-UAE agreement brings that reality out into the open. The next thing to watch is whether more Arab countries, like Saudi Arabia, will follow in the UAE’s footsteps.

It also shows that the old way of thinking about peace in the Middle East has shifted. Under a 2002 Arab peace initiative, Arab countries agreed to reject normalization with Israel until a Palestianian state was created. Clearly, not all Arab countries feel beholden to an 18-year old deal. Now, the Palestinians can’t use the Arab countries as cover for rejecting even a discussion of peace. Instead of focusing exclusively on the Palestinian question, Arab countries are more willing to look for common ground, with the hope of making the region a safer and more stable place.

If you watched the Democratic National Convention this week, you might have been surprised by the one big thing that’s missing. No, not the crowds. We’re talking about the long list of big-government policies touted by Biden and his surrogates throughout the campaign.

Instead of focusing on what liberals are for, the convention focused on personal stories and personalities. It almost seemed like they didn’t want people to hear about trillion dollar plans, tax hikes, and the millions of jobs they would cost. Let’s remember that Bernie Sanders and Alexandria Ocasio-Cortez sat on Biden’s task forces and drafted many of his policy proposals. These include:

→ Climate: While Biden doesn’t call his climate plan the “Green New Deal” by name, it would have a similar effect. With a goal of reaching net-zero fossil fuel emissions by 2050, his plan would require a massive overhaul of the American economy at the expense of many job creators.

→ Government-run healthcare: His government-run public option would cost nearly a trillion dollars and crowd out private insurance in the long-run.

→ Taxes: Biden has called for $3 trillion in new taxes to fund his ambitious agenda.

→ Jobs: While many of his regulations would kill jobs, Biden’s task force calls for a large-scale federal government employment program that would replace the private market.

Biden has come a long way from being the “moderate” in the presidential primary. In a bid to unify the wings of his party, he has taken one giant leap to the left.

“Let’s give weapons to the world’s leading state sponsor of terrorism” — said no one ever. Except, last week the United Nations said exactly that.

Here’s the background: The 2015 Iran deal included a United Nations arms embargo that makes it illegal to sell dangerous weapons to Iran—a country responsible for terrorist activity throughout the Middle East and beyond. That’s the good news. The bad news is… the embargo expires in October. When the United States introduced a resolution last Friday to extend the embargo, only one country out of the 15 UN Security Council members—the Dominican Republic—supported the motion. Even America’s European allies—France, Germany, and the United Kingdom—abstained.

How bad is this? Very bad. New intelligence just revealed that Iran offered the Taliban bounties to kill U.S. and coalition troops in Afghanistan. Iran has a long history of giving weapons to terrorist groups that are responsible for the deaths of thousands of civilians. 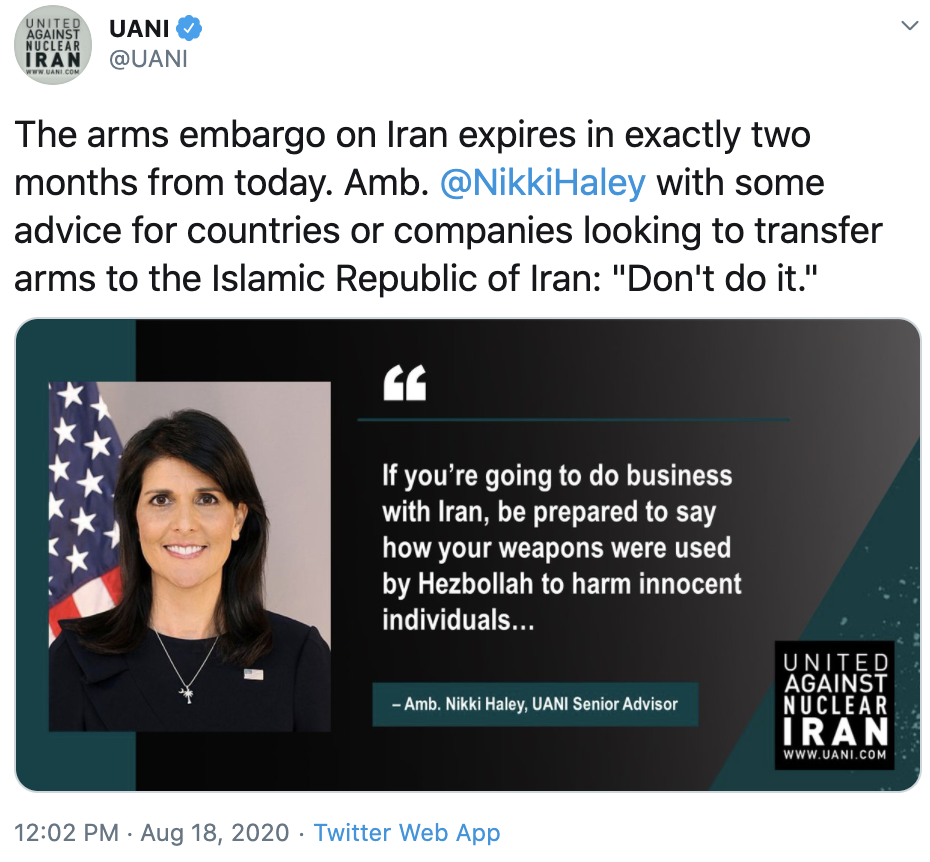 Who supports the embargo? The countries that stand to lose the most from an emboldened Iran support keeping the embargo in place. Israel, who has long been a target of Iran’s terror proxies, Bahrain, Kuwait, Oman, Qatar, Saudi Arabia, and the United Arab Emirates.

Who is against it? No surprise here—Russia and China. Both countries are chomping at the bit to sell arms to Iran, and both have recently forged closer ties with the regime. In July, Iran announced that it was negotiating a partnership with China that could result in Chinese investment of up to $400 billion.

What are our options? On Thursday, the administration started a process at the UN to “snap back” sanctions on Iran. Under the UN resolution that endorsed the 2015 nuclear agreement, any party can reimpose sanctions—including the arms embargo—on Iran if it determines that Iran has violated the 2015 agreement. Some argue that the United States lost the right to snap back sanctions when it withdrew from the Iran deal, but the UN resolution explicitly includes any of the original participants of the Iran deal.

→ Read more: What the snapback debate says about the Iran deal (National Review)

August 18 marked 100 years since the 19th Amendment was ratified by the states, granting women the right to vote. The celebrations were vast and varied as women from all walks of life came together to celebrate equality: