Amb. Nikki Haley has repeatedly spoken out against communist China’s lies and the danger of ignoring its growing threat on the world stage. This week, she published an op-ed calling on President Joe Biden to stand up to the Chinese Communist Party and boycott the 2022 Winter Olympics in Beijing.

In 2008, when the Summer Olympics were hosted in Beijing, many in the international community thought engaging China would nudge the communist country toward a more open and free society. Today, we have no such illusions. China’s determination to rule with an iron fist is abundantly clear. Consider the evidence:

For China, the 2022 Olympics is a chance to pull off one of the greatest propaganda cons with the eyes of the world watching. If America and other free countries participate in China’s sham, communist officials will use it as proof of China’s leadership and good standing.

“If the United States boycotts the Winter Olympics, it will send an unmistakable message that China’s tyranny and threats are unacceptable. It will show that actions have consequences …. President Biden should choose America’s principles. We know what Communist China is. We know what Communist China is doing. The leader of the free world should not hand that evil regime a powerful symbolic victory. Nor should the freest nation in human history. The United States must boycott Beijing 2022.” – Nikki Haley

Yes, boycotting the Olympics would be a terrible loss for our athletes who have dedicated their lives to training. That loss, though, must be weighed against the horrors occurring in China every day, and the prospect that enabling and empowering China will lead to even greater horrors down the road.

Other conservatives have also sounded the alarm. Rep. Michael Waltz (R-FL) introduced a resolution calling for a boycott, joined by cosponsors Reps. John Katko (R-NY) and Guy Reschenthaler (R-PA). Rep. Mike Gallagher (R-WI) has pushed for a boycott as well.

America must be a leader in holding China accountable. If you agree and want to help Nikki Haley stand up to communist China, please sign Stand For America’s petition today.

→ Read more: White House has not made ‘final decision’ on participation in Olympics in China (Reuters)

Case in point: This week, two House Democrats sent a letter to a dozen major TV and content providers—including Verizon, Amazon, Comcast, and AT&T—pressuring them to remove conservative news channels from their platforms. The truth is that liberals don’t like what conservative channels have to say, and they want to regulate what news people hear based on their biased beliefs. They’ve also conveniently forgotten that freedom of speech and the press are protected by the Constitution.

Think about that for a second. This kind of government control of the media happens in autocratic countries—a fact Republicans brought up in a House hearing on Wednesday and Democrats promptly ignored. Look at China, where the Chinese Communist Party regularly imprisons journalists and engages in internet censorship. Look at Russia, where online content is filtered through state-run systems.

Our take: This isn’t just a right vs. left issue. Once you open the door to government speech police, the cops will come for conservatives and liberals alike. If conservatives don’t want the government to control what we hear and say, then we have to stand up for free speech—even when it’s speech we dislike.

When Joe Biden entered the White House, we wondered: would he continue Trump’s tough stance against Russia or would he go soft? A month later, we have our answer. The Biden administration has done little to push back as Putin resumed construction of his prized Nord Stream 2, an energy pipeline from Russia to Europe.

What is Nord Stream 2? Nord Stream 2 is a 760-mile pipeline that will carry natural gas from Russia to Germany, doubling the gas capacity from the current Nord Stream 1 pipeline. The new pipeline will give Russia greater access to Europe’s energy market, especially Germany.

Why is it a problem? The pipeline will increase Europe’s dependence on Russian energy and allow Putin to manipulate the European energy market to achieve his goals. The pipeline also purposefully cuts Ukraine out of Europe’s energy supply chain, hurting a democratic American ally that Putin wants to control. Finally, the pipeline means our European allies will purchase natural gas from Russia instead of America. It’s a win-win-win for Putin, and a lose-lose-lose for the United States.

What did Trump do? President Trump worked with Congress in 2019 to pass legislation that would impose sanctions on companies involved in the pipeline’s construction. The threat of sanctions alone brought construction to a halt. As Biden prepared to enter the White House, Russia smelled weakness and resumed construction.

What’s Biden doing about it? Biden has largely given a free pass to many companies and individuals working on the Nord Stream 2 pipeline. The lack of action has set our allies on edge. Both Poland and Ukraine urged Biden to take steps to stop the pipeline. Biden’s also facing bipartisan pressure from Congress to stop the Russian project. 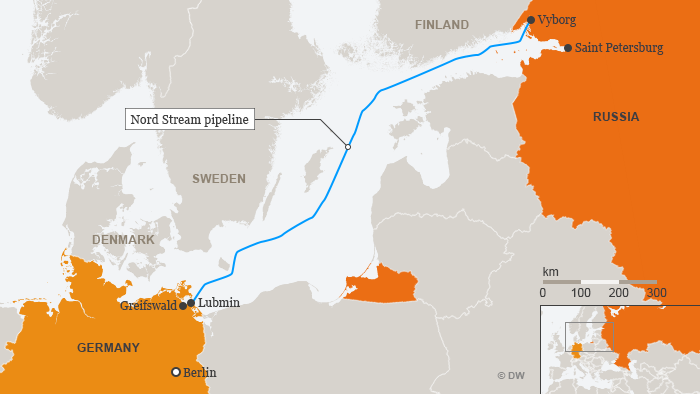 Our take: The last thing we want to do is empower Putin, hurt Ukraine, and boost the Russian economy at the expense of our own. That means President Biden needs to take a tougher stance with our European allies like Germany. Biden needs to put a stop to Nord Stream 2, and Congress needs to speak up. Now.