No doubt, the past few weeks have been concerning and chaotic. But we have to remember what is at stake and what priorities to focus on in the weeks and months ahead.

Amb. Nikki Haley wrote a new op-ed on Fox News this week about exactly that. She reminds us that on January 20, the federal government will be controlled entirely by Democrats, including Joe Biden, Chuck Schumer, and Nancy Pelosi.

Today’s Democrat Party is not your parents and grandparents’ Democrat Party. There was a time when socialism was relegated to the fringes of society, when America was respected and celebrated, when following the rule of law was just common sense. No longer.

The Democrat agenda is the most far-reaching, far-left agenda in modern times. Instead of defending free speech, the so-called “progressives” want to cancel and silence anyone they disagree with. Instead of a strong national defense, they want to coddle dictatorial regimes. Instead of lifting up hard-working Americans, they tell people that big government is the solution to every imaginable problem, and that higher taxes and free money will fix what ails us.

But there is hope, because the truth and the facts are on our side. Socialism has failed everywhere it’s been tried, and capitalism has lifted up more people around the world than any other system. The past four years have shown us that letting people make decisions about how to spend their money and grow their businesses is far better than trusting government bureaucrats. And the world is a safer place thanks to the administration’s efforts to get tough on Iran and China.

“Ultimately, liberal elites think they’re smarter than the rest of us — that they have the brains and the birthright to build a better economy for all. But they don’t….The overwhelming majority of Americans still believe in this country. We know America isn’t racist. We know free speech matters. We know capitalism can lift up the poor and unleash a new era of prosperity. Most of all, we know America isn’t America without freedom. And we will stand up for preserving that freedom for ourselves and future generations.”

But the task ahead of us won’t be easy. We have to do our part to remind people what America is all about. We need to engage people with conversation and facts. We need to remember that debate and education are more powerful persuaders than yelling and attacks. As Nikki writes, “America is worth it. So let’s resolve, right now, to stand for America — and keep the flame of freedom alive.”

Martin Luther King, Jr. Day couldn’t come at a more important time. With violence in America rising over the summer and last week, and with political tensions at an all-time high, we should take MLK’s wise words to heart:

“Violence never brings permanent peace. It solves no social problem: it merely creates new and more complicated ones. Violence is impractical because it is a descending spiral ending in destruction for all.”

Martin Luther King, Jr. inspired a movement based on the ideas of justice and peace. He rejected violence unequivocally even in the face of injustice. While debate is important, it needs to be grounded in non-violence and kindness. Our country needs to move forward and tackle big challenges. Violence is not, and will never be, the answer.

→ Read more: MLK: The quest for peace and justice (Nobel)

It’s time to face the harsh reality. In a couple of days, self-declared socialist Bernie Sanders will become the chairman of the U.S. Senate Committee on the Budget. Let’s walk through what that means.

What does the Budget Committee do? The Budget Committee oversees the plan for how much our government spends. That’s right…a socialist will be in charge of America’s collective pocket book…including a very powerful tool known as “budget reconciliation.”

What is budget reconciliation? It’s a process that allows the majority party in the U.S. Senate to pass budget-related bills with only 51 votes instead of a “filibuster-proof” majority of 60 votes. This matters because Senate Democrats will lead by the slimmest of majorities. With 50 Democrats and 50 Republicans in the Senate, Kamala Harris will be the tie-breaking vote to push through liberal bills that can’t get bipartisan support.

“[Democrats] will almost certainly be passing a reconciliation bill, not only for the Affordable Care Act, but for what we may want to do further on the pandemic and some other issues that relate to the well-being of the American people.”
— Nancy Pelosi

What’s Bernie’s plan? Sen. Sanders has already vowed to be “aggressive” when it comes to using his chairmanship to enact his progressive agenda on healthcare, the climate, infrastructure spending, and cutting defense spending. Most importantly, Bernie wants to “test the legal bounds of how reconciliation can be used so that Democrats can pass policies that go beyond traditional budget items and address ‘structural problems in American society.’”

At the top of the list is an expanded pandemic “stimulus.” On Thursday, Joe Biden released details on a $1.9 trillion spending bill (on top of the $3.5 trillion Congress has already spent during the pandemic) that will include $1,400 government checks for people, regardless of their employment status; giveaways for state and local governments; and unemployment benefits that extend through September, regardless of how the economy or workers are doing. 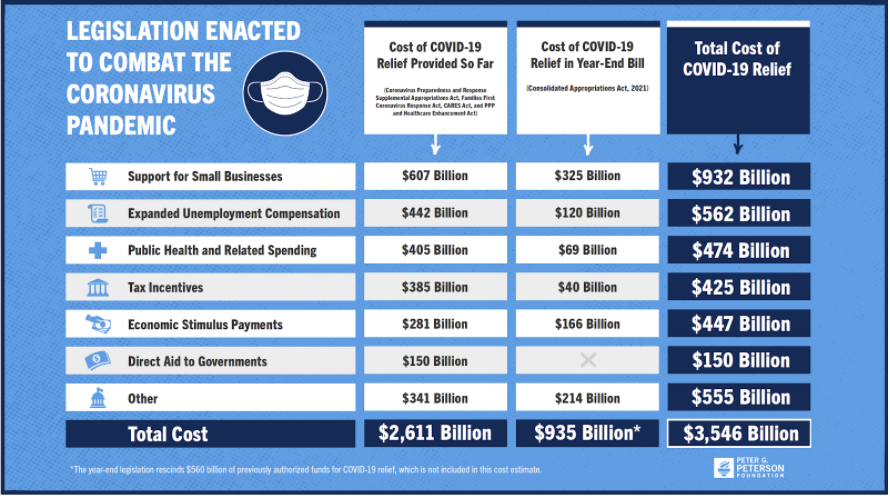 It also includes liberal wishlist items that have little to do with the current pandemic and could actually cause more harm. For example, Biden’s plan to double the federal minimum wage would kill between 1.3 and 3.7 million jobs and burden small businesses that are already struggling. Other items include expanded child tax credits, child care subsidies, and food stamp benefits, all adding to our unsustainable national debt.

Our take: Already, liberals have not been shy about using their majority to unleash their big-government agenda on the American people. The good news is that a very narrow majority in both the House and Senate will make some of the most aggressive legislation difficult to pass. Moderate Democrats (the few that exist) are already balking at further stimulus spending. We need to remind the American people that government spending isn’t “free.” Ultimately, taxpayers will be called upon to foot the bill.