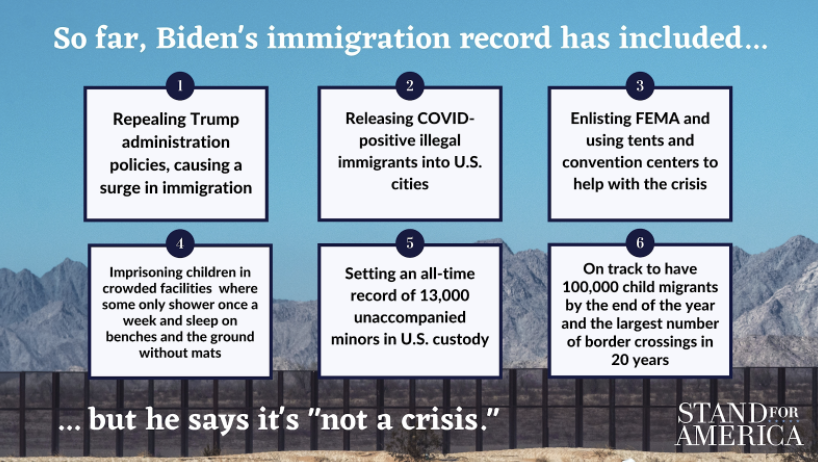 For more than a month, we’ve highlighted how Biden’s weak immigration policies have caused a crisis on our southern border. The situation has continued to spiral out of control as the Biden administration’s “solutions” involve denial and blame.

What’s the latest? On Tuesday, Biden’s Department of Homeland Security Secretary repeated the claim that the border crisis was the Trump administration’s fault. Two days later, news reports revealed that the Biden administration has requested Mexico’s help to fix the problem. If this sounds familiar, it’s because Trump used the exact same approach to secure our border when he was president. Maybe instead of falsely accusing Trump of causing the crisis, Biden should adopt a few more of Trump’s successful border policies—like stopping “catch and release” and sending a clear signal that we don’t invite illegal immigration.

The GOP is pushing back. A group of House Republicans traveled to El Paso this week to tour detention facilities and examine Biden’s damage for themselves. Their report? It’s worse than we thought. The surge is now being exploited by gangs, drug cartels, and even people found on our terror watchlist. One day after the GOP returned to Washington from El Paso, Rep. Mariannette Miller-Meeks (R-IA) proposed a bill that would require all migrants to test negative for COVID before being released into cities. This is a step in the right direction, but more must be done to make sure migrants aren’t encouraged to illegally cross the border in the first place.

Our take: Joe Biden has a dilemma. He wants to keep his open border activists happy, but he can’t escape the harsh reality that open borders don’t work. The Biden administration needs to stop playing politics and start safeguarding the border. It’s easy to stand on a debate stage and support one crazy idea after another. But governing is about results, and right now, the results speak for themselves.

In the running for the “worst idea ever”: cut money from our military and give money to a group that funds China’s climate change efforts. This week, Democrats in Congress managed to propose both.

Here’s what happened …. President Biden has already signaled he wants to freeze defense spending, but far-left members of his party want to go even further. Fifty Democrat House members sent a letter to Biden this week pressuring him to slash the Pentagon’s budget by 10%.

What do liberals want to spend money on? A new Democrat budget proposal would send $3 billion to the Green Climate Fund (GCF), a UN effort that helps pay for the Paris Climate Agreement. A top priority of Biden’s “climate czar,” John Kerry, the fund has given at least $100 million to China to pay for climate change projects. This is not a joke. Meanwhile, China continues to increase its emissions and build coal plants around the world, despite its “commitments” under the Paris Climate Agreement.

Our take: America faces major security threats that can’t be papered over with climate change charity. Just look at what China is doing. The communist regime currently has the largest Navy in the world and is investing heavily in building a “world-class” military. While we can have a discussion about other global issues, our first priority must be protecting our country and its citizens.

Woke-ism is everywhere. From our government, to the mainstream media, to universities … even K-12 schools. All across the country, states and local school districts are developing lessons that put race at the center of learning and present a false version of American history.

Take a look at some of the most egregious examples:

How are parents responding? In some cases, concerned parents have raised questions and spoken out. That’s what parents in Loudoun County, Virginia, did when the school system packed its curriculum with racial rhetoric. But other parents and teachers in the Loudoun community quickly united to punish and silence the questioners. When it comes to education, bullying doesn’t just happen on the playground.

Is this just a state and local problem? Local school systems are the most common culprit, but keep an eye on the federal government under Biden. A new bill called the “Civics Secures Democracy Act” is currently making its way through Congress. The bill’s language is vague, but some critics caution the bill is a backdoor effort to financially reward schools that teach woke curricula. 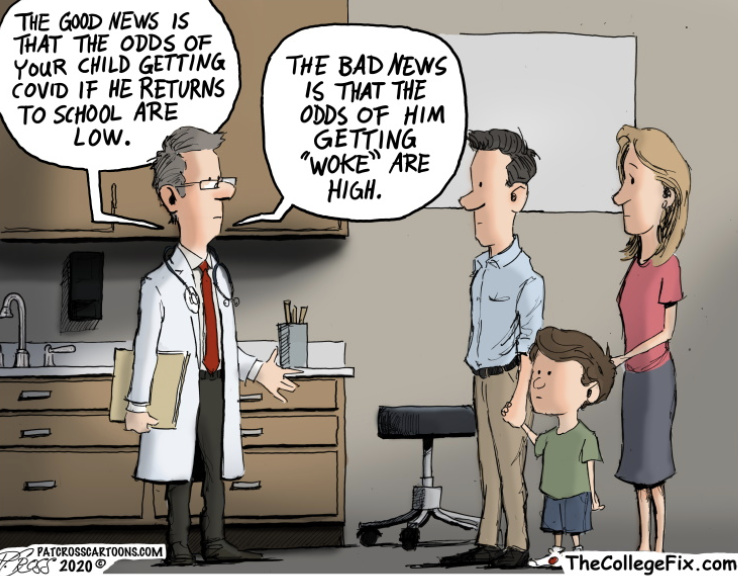 
Our take: Parents send their children to school to learn the academic and real world skills they’ll need to succeed. For example: how to read, write, think critically, and make friends. But in a short time, liberals have gone from renaming schools to upending education to advance their social agenda. It’s students who suffer when the left uses them to achieve activist goals instead of prioritizing their learning. That’s not just bad for students; that’s bad for America.