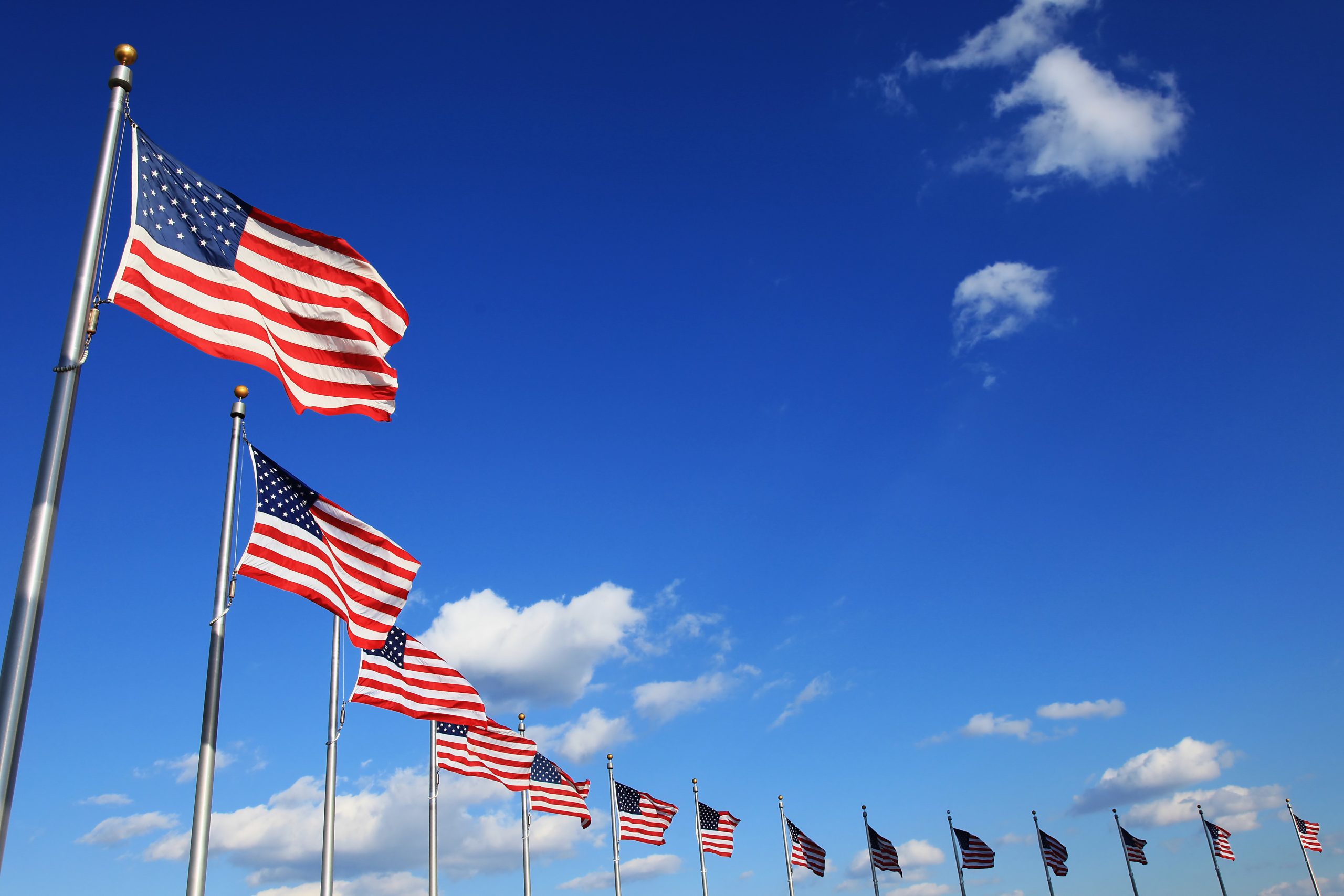 Quick summary: This week, President Joe Biden took his first trip overseas to meet with European leaders (at the G-7 and NATO summits) and Russian President Vladimir Putin. He should have used this trip to showcase American leadership. Instead, he signaled to the world that his foreign policy is heavy on words and light on actions.

What is the G-7? It stands for “Group of Seven,” and it’s made up of seven of the world’s wealthiest nations—the United States, Canada, France, Germany, Italy, Japan, and the United Kingdom. G-7 leaders hold a summit every year to discuss how to combat global economic problems.

What is NATO? NATO, or the North Atlantic Treaty Organization, is composed of 30 member states from North America and Europe. The NATO alliance was formed in 1949 to protect member nations from the Soviet Union’s Cold War threats. Ever since then, NATO has been largely focused on defending members’ freedom from Russia.

Why the meeting with Putin? Putin’s Russia poses a serious threat to the United States and the world. From cyberattacks on U.S. companies, to threatening Ukraine, to its flagrant disregard for human rights, the Russia problem demands action. But instead of punishing Russia, Biden revived Obama’s weak foreign policy that prioritizes talking over doing.

What happened at these meetings? A lot of placating European friends, but not much holding tyrants accountable. The G-7 and NATO members released a joint statement condemning Communist China’s human rights record, but China couldn’t care less. There was no movement on boycotting the 2022 Beijing Olympics or pushing China to agree to a real investigation into COVID-19’s origins (a toothless G-7 statement about a China investigation doesn’t count).

Biden and Putin had a three-hour “heart-to-heart,” but don’t hold your breath waiting for Putin to change his stripes. History shows that “strategic dialogue” doesn’t stop dictators from attacking freedom or human rights. Dictators only change their ways when it’s in their interest to do so.

Our take: Not only was Biden’s trip a waste of time; it gave Putin a platform to spread more lies. As Ambassador Nikki Haley pointed out on Fox News this week, Biden could be protecting America and Europe’s energy security by stopping Putin’s Nord Stream 2 pipeline, or standing up for our ally Ukraine. Instead, he’s issuing weak statements and empty promises while handing Putin the attention he craves but doesn’t deserve. This is alarming—for America and our allies. 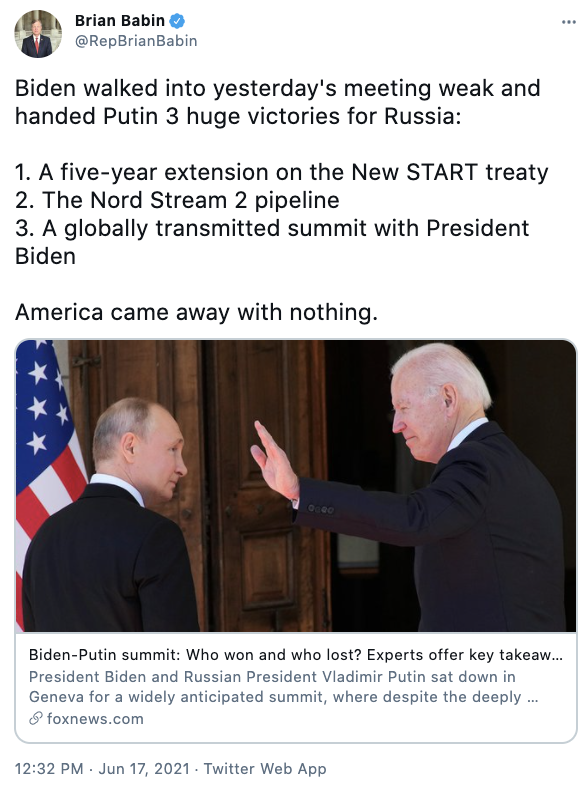 Quick summary: President Joe Biden is courting Iran to coax it back into a nuclear deal. That’s a win-win for terrorists and a lose-lose for America, Israel, and the rest of the world. On her trip to Israel this week, Ambassador Nikki Haley witnessed firsthand what Biden’s bad policies would mean: less peace in the Middle East and more chaos, violence, and innocent lives lost.

What is Biden doing? Bending over backwards to restore Barack Obama’s failed Middle East policies and renew the Iran deal that many on Biden’s team had a hand in creating. Biden initially promised not to relax U.S. sanctions against Iran until Iran stopped enriching uranium, but that promise didn’t last long. Last week, Biden lifted sanctions on Iranian officials and energy companies even as Iran ramps up its nuclear activity and holds a sham election. If he caves to Iran’s demand to lift all sanctions, he’ll open the floodgates for billions more dollars to flow into the murderous regime’s coffers.

What’s the problem? Iran is the world’s top funder of terrorism. It sends weapons and resources to multiple terrorist organizations on the regular, including Hamas in Gaza, Hezbollah in Lebanon and Syria, Shiite soldiers in Iraq, and Houthis in Yemen. The 4,000 rockets Hamas launched at Israel last month were designed by … you guessed it … Iranians—who praised Hamas for the attacks.

Last weekend, Amb. Haley saw the destruction these Iran-backed terrorists rained down on the Jewish State. She issued this warning: “It’s a death wish for Israel if Biden gets back into the Iran deal. … It’s one atomic bomb away from the world seeing total destruction.” 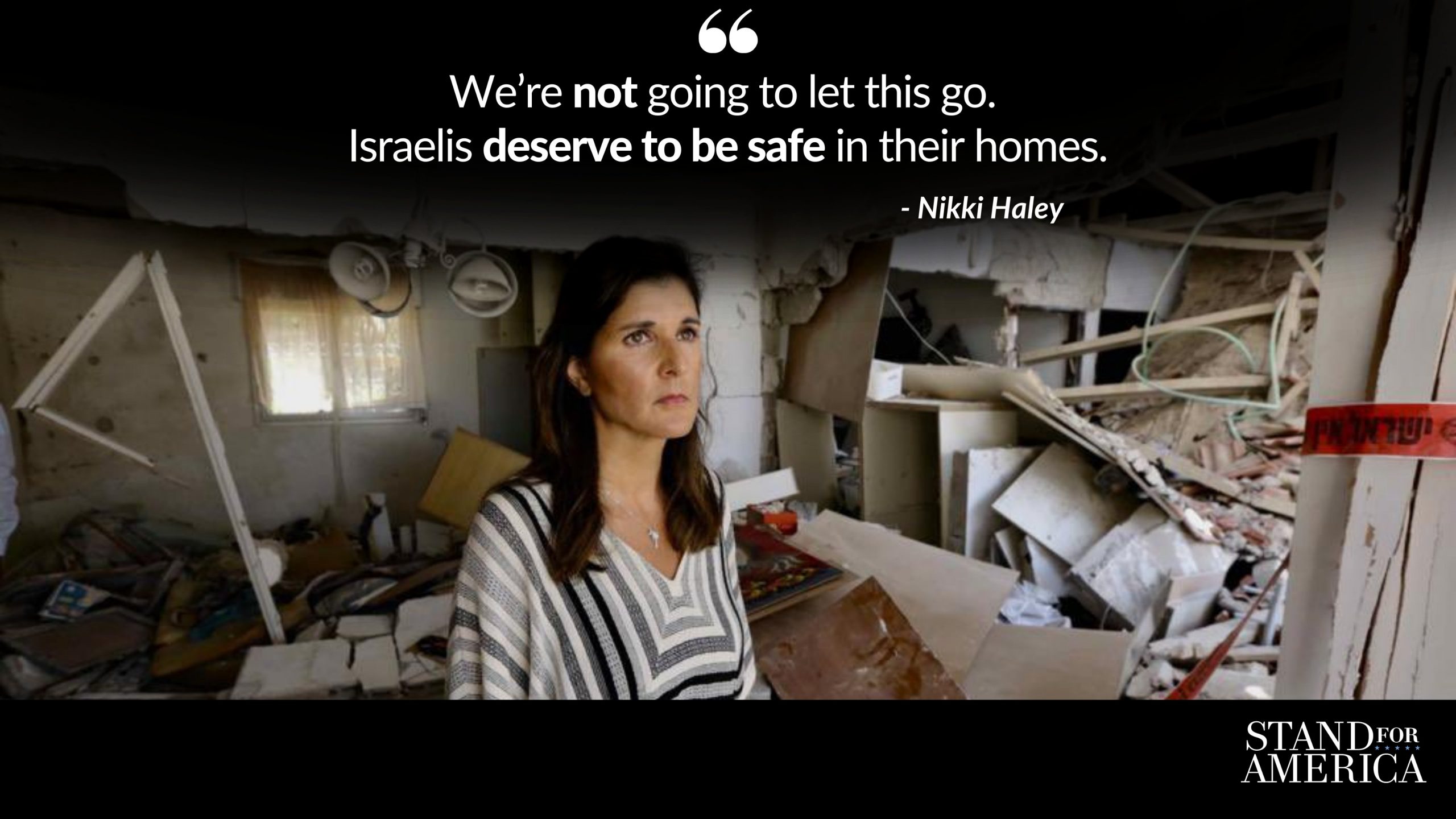 What are Republicans doing? Last week, GOP senators introduced legislation that would ban Biden from signing any deal with Iran that isn’t approved by Congress. As Senator Ron Johnson (R-WI) explains: “Any potential agreement with Iran involves risks that affect our entire nation. It is critical to the security of America and to world peace that any deal Biden negotiates with Iran be deemed a treaty requiring approval by the U.S. Senate.”

Our take: Biden’s rush to reenter the Iran deal betrays his weakness on the global stage. The result will be an emboldened and richer Iran that will only continue to fund its terrorist tentacles and wreak havoc in the region and beyond. This is not speculation. The recent Israel-Hamas battle is all the proof you need.