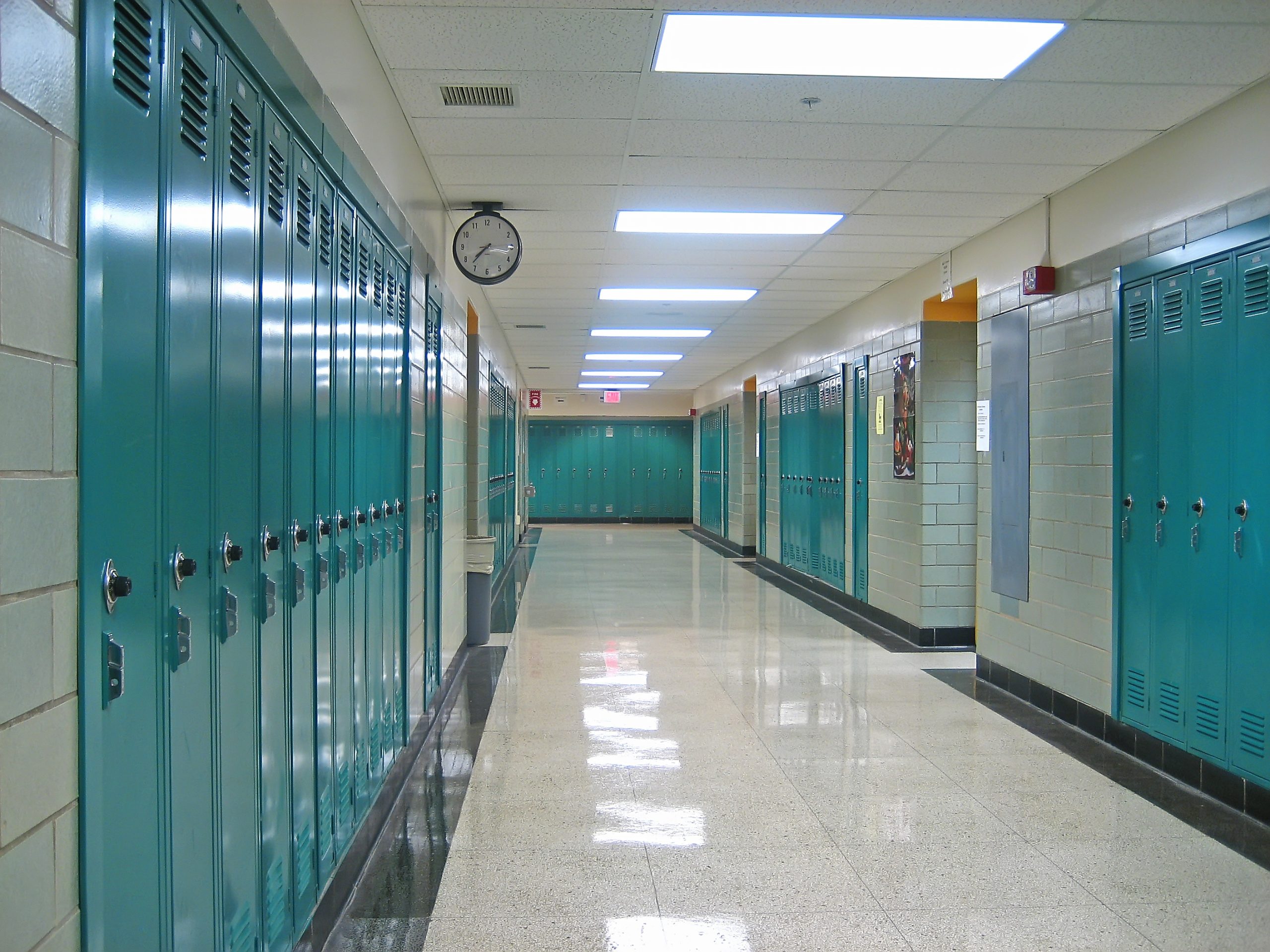 Quick summary: Liberal politicians and activists are trying to indoctrinate America’s students with a divisive—and racist—ideology. The good news: Local communities and lawmakers don’t want kids to be taught to judge people by the color of their skin. They are speaking out and rejecting racist education.

What are liberal officials pushing? It’s called Critical Race Theory, or CRT for short. Literally developed by Marxists, CRT puts race at the center of every part of society. Most notably, it labels people as “oppressor” or “oppressed” based on the color of their skin. This used to be called racism, which is exactly what it is.

What does CRT look like in practice? Education leaders are mandating curriculum and teacher training programs based on this theory. One school in California forced first-graders to point out their races and then rank themselves based on their “power and privilege.” In Seattle, a school district condemned its white teachers of “spirit murder” against black children. A New York City father pulled his daughter out of a school that he said tried to turn his family into Black Lives Matter activists. 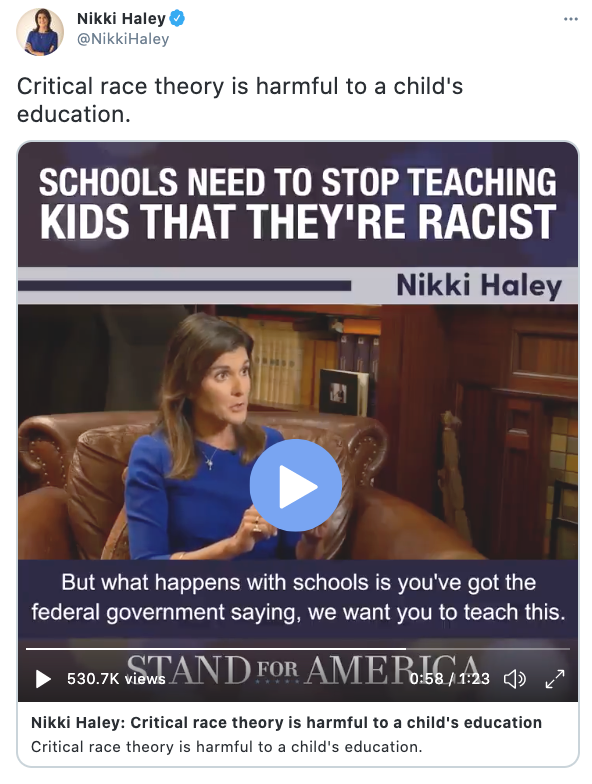 How are parents responding? By refusing to stay silent. Last week in Southlake, Texas, parents and voters soundly rejected CRT by electing two new school board members who promised to fight it. Hannah Smith, one of the new board members, summed up the significance of their victory:

“This election was a referendum on those who put personal politics and divisive philosophies ahead of … students and families and their common American heritage. … The voters have come together in record-breaking numbers to restore unity. By a landslide vote, they don’t want racially divisive Critical Race Theory taught to their children or forced on their teachers.” – Hannah Smith

What’s happening at the state level? State lawmakers are advancing legislation to keep CRT out of schools.

But: Far-left CRT activists have an ally in President Joe Biden. He proposed a new rule that praises the “1619 Project”—an error-ridden New York Times effort that says America’s history is defined by racism. The project has been widely discredited, but if Biden finalizes his rule, taxpayer dollars could fund school programs that center their lessons on it.

Thankfully, there’s more good news: Last week, 38 Republican senators called on Biden’s education secretary to revoke his new rule and abandon harmful philosophies like the “1619 Project,” saying: “Our nation’s youth do not need activist indoctrination that fixates solely on past flaws and splits our nation into divided camps.”

What’s really at stake? Parents want schools to teach their students the truth about American history. What’s more, they expect educators to give students the basic tools they’ll need to succeed in the future. As leftists try to derail this mission, we’re happy state lawmakers and local communities are still fighting to make sure kids can rise, not learn to hold each other down.

Why are unions bad for America? Unions monopolize markets, violate labor laws, and kill jobs. For example, when unions force companies to hike wages, those that can’t afford to raise salaries have to lay workers off. Unions also make workers pay monthly fees, which they regularly use to protect union interests and elect liberal politicians. Not to mention the unions’ long history of corruption, embezzlement, and racketeering …
​ 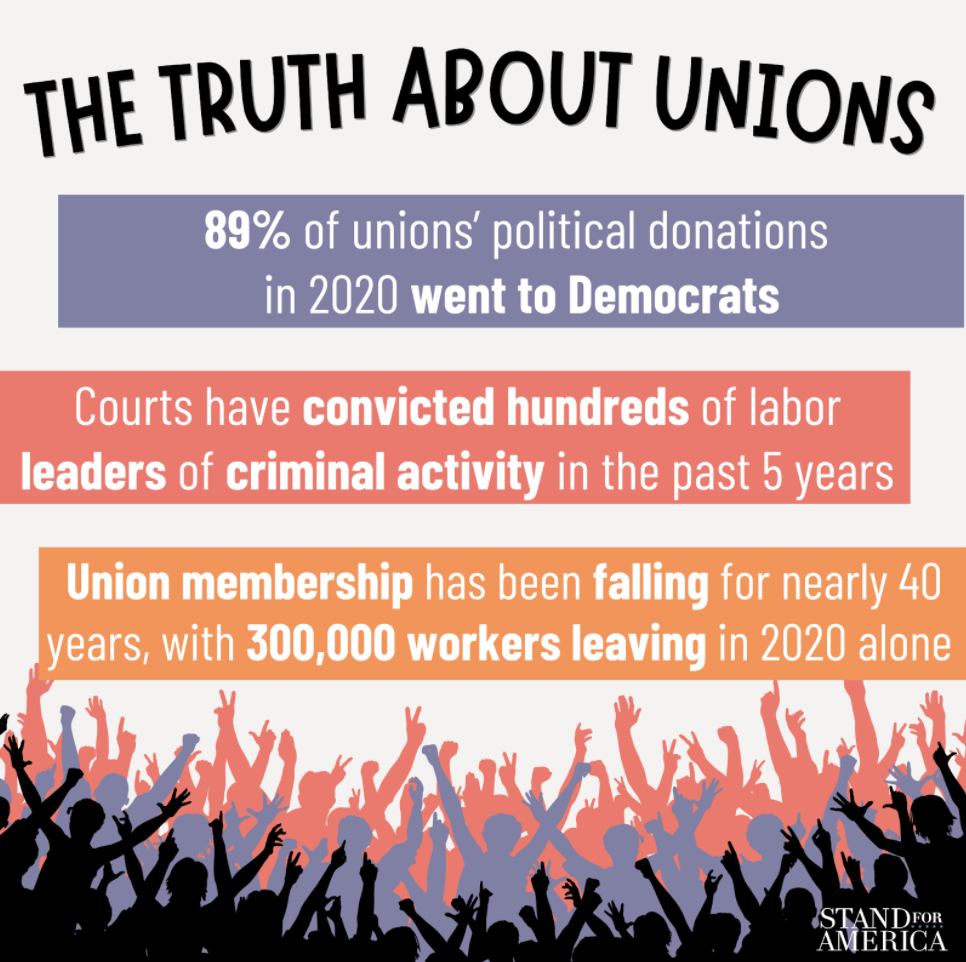 Do workers want unions? The number of workers joining unions has steadily declined for decades. Last month, nearly 75% of Amazon workers in Alabama voted against unionizing. In November, when unions in ultra-liberal California tried to make it easier to organize close to a million workers, 58% of voters struck it down.

Why do Democrats do unions’ bidding? As union bosses rake in billions of dollars each year in union dues, they donate heavily to Democrat campaigns and liberal activist groups (see Planned Parenthood and the Clinton Foundation). What do they expect in return? Politicians who will pad their coffers and pass pro-union policies.

Hence why the unions have a stranglehold over Biden’s agenda, starting with his pandemic response:

Last but not least, Biden and Congress are pushing the PRO Act. This bill would overrule right-to-work laws in 27 states, forcing millions of workers into unions. It would also destroy entire business models like franchising and independent contracting so that unions can control even more workers.

While House Democrats passed the PRO Act in March, it’s not likely to pass in the Senate, unless Biden bows to the union bosses who have amped up pressure on Democrats to eliminate the filibuster and threatened to pull donations from their campaigns if they fail to pass the bill.

Our take: So far, Biden has placed appeasing labor unions ahead of protecting workers’ rights and promoting students’ success. Yet Americans don’t want what unions are selling—so Republicans should hold the line against Biden’s big labor handouts.