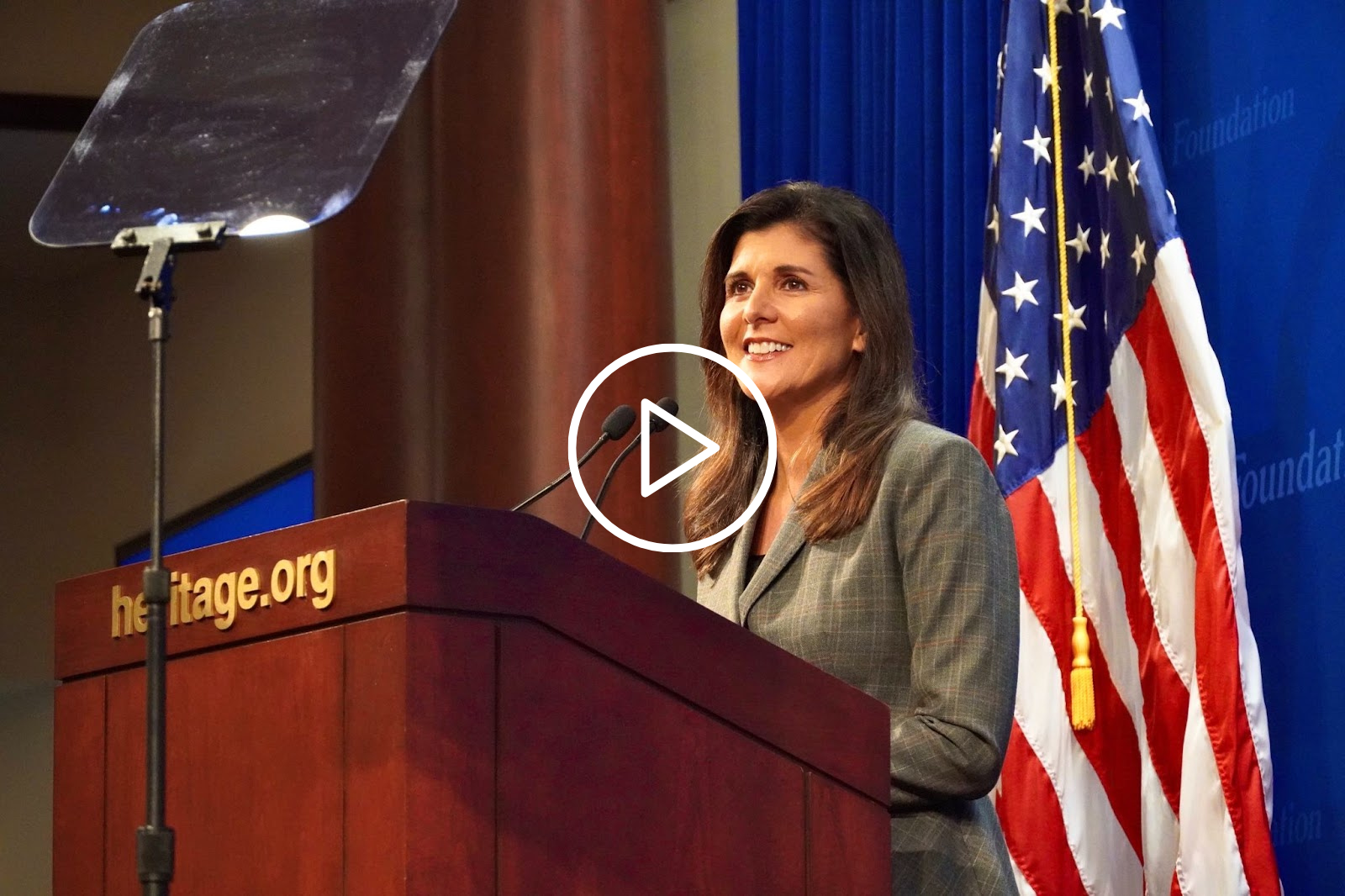 Quick history lesson: Four decades ago, the United Kingdom’s citizens were suffering under socialist policies, power-hungry labor unions, and corrupt politicians. Then, Prime Minister Margaret Thatcher took office and steered the ship in the opposite direction – toward capitalism. She knew economic freedom was the only way out of economic stagnation. Even when she faced pressure from all sides to make a “u-turn” and reject free-market principles, she flatly refused. Thanks to her courage and steadfast commitment to freedom, she set England back on the path to prosperity once again.

Why should this story matter to Americans today?

This week, in a speech at the Heritage Foundation, Ambassador Nikki Haley pointed out that America is at a similar crossroads. Prices are soaring, the economy is slowing, and America’s families are hurting. Yet the Democrats want to open the federal money spigots even more and hike taxes on Americans.

What should we do? Like the Iron Lady, America must refuse to make a u-turn away from capitalism. Instead, we should run full speed toward capitalism and away from socialism.

Why? Socialism brings oppression, hardship, and victimization. It’s a dangerous ideology that tells Americans they can’t control their own destinies. As Nikki explains:

“It says to a single mom: Give up and let welfare take care of you. It says to a laid-off worker: Don’t try. We’ll pay you to stay at home. It says to a student: Don’t strive or learn. You can’t get ahead, because the country is rigged. And it says to all of us: Don’t bother to dream. Government’s got this.” – Amb. Nikki Haley

Capitalism, on the other hand, unleashes hope, freedom, and strength. It lifts people out of poverty and empowers them to accomplish incredible goals. And capitalism is what America needs—now and forever.

Why is capitalism so powerful? It aligns with the perfect principles at our country’s core—by promoting the truth that all Americans are equal and capable of achieving extraordinary things. Like Nikki says, “Americans are the most innovative, creative, and visionary people in history.” In a capitalist society that inspires Americans to dream big and use their unique talents and passions, there are no bounds to what Americans can do.

That’s why we must stand for economic freedom and reject anyone—including liberals, conservatives who should know better, and corporate bullies—who pushes us toward socialism. Take it from Nikki: “Defeating socialism is a moral necessity….Our fellow citizens and future generations deserve better than a country that gives up on them and holds them down. They deserve to live in a land that believes in them—a land of realized dreams—the best hope on earth.”

Quick summary: More than 3,000 migrants—making up the largest caravan of the year so far—are hiking from Mexico toward our southern border. A new report shows that fentanyl seizures at the border doubled over the past year. (FYI: Fentanyl kills tens of thousands of Americans each year.)

Suffice to say, the border crisis keeps getting worse. Yet liberals are still bending over backward to push policies that could turn the border emergency into a perpetual disaster.

What’s happening? Democrats in Congress are trying to use their multi-trillion-dollar spending package to overhaul the immigration system. Tacked onto their $1.75 trillion wasteful spending bill is this surprise: a provision to let illegal immigrants stay in America—without facing any repercussions for breaking the law to come here.

Wait…what does immigration have to do with spending? Answer: Nothing. In fact, the Senate parliamentarian (AKA the Senate’s top rule maker) already told the Democrats—not once, but twice—that they can’t cram immigration reform into their spending package. Why? The process they’re using to pass their bill without GOP support says that all provisions included in it must relate to the budget or taxes. Trying to slip amnesty into this bill is like trying to fit a square peg into a round hole. It violates Senate rules.

Now, Democrats are hoping the third time’s the charm and pushing a “Plan C.” It would give millions of illegal immigrants legal status to live and work in America. This means America’s cities would have to expend extra resources (i.e., in hospitals and schools) to people who deliberately ignored the legal process to migrate here. What’s worse, aspiring immigrants who watch the Democrats give millions of immigrants a free pass will feel even more emboldened to cross our border illegally.

What happens next? At least three Democrat lawmakers have threatened to vote “no” on the spending bill if their immigration overhaul is stripped from it. Rep. AOC (D-NY) implied this week that lawmakers should ignore the Senate parliamentarian if she blocks their “Plan C” immigration plot. Other Democrats say that, if all else fails, they’ll push President Joe Biden to grant amnesty by executive action.

What is Biden doing? Making it harder for border agents to deport undocumented immigrants. This week, Biden’s Department of Homeland Security (DHS) retracted a Trump-era policy that prevented asylum seekers from overwhelming border facilities. In September, DHS announced it would stop deporting illegal immigrants solely because they’re undocumented. And last week, the Biden administration launched another attempt to end Donald Trump’s “Remain in Mexico” policy, even though the Supreme Court blocked Biden’s plans to end it back in August.

Over the past year, border agents have released nearly 300,000 illegal immigrants into American communities. Of the 1.66 million immigrants who crossed in the last 12 months, Border Patrol released one in six.

What are Republicans doing? Telling the truth about how the Democrats’ immigration overhaul would hurt America. In a letter urging Biden to meet with him to discuss the crisis, Rep. Kevin McCarthy (R-CA) said, “By passing amnesty and other federal benefits for illegal immigrants into law, you will be incentivizing even larger numbers of illegal migration. This policy would make the border crisis even worse.” On Thursday, nearly 100 GOP lawmakers demanded answers from Biden’s DHS on how it plans to deal with the caravan headed toward the border right now.

Our take: DemocratRep. Jesús “Chuy” Garcia (D-IL) said recently that shutting down his party’s immigration overhaul would be “devastating.” But he’s got it backwards. Allowing the Democrats’ immigration plan would be devastating—for our border security, for the rule of law, and for safety. It’s time for them to stop rewarding lawlessness and start safeguarding our borders.